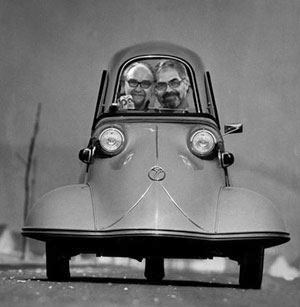 We are a creative team based in Palma de Mallorca and with a long history in the field of exhibition, graphic design and formal creation.

One of our passions are the museum shops . Whenever we havesome spare time, we get lost between their the specialized books and countless curious, funny and unique objects of which we create collection. Some time ago, in addition to being consumers, we dreamed to be the creatives behind one of these objects and in 2012 we decided that the time had arrived. For several months we investigated and did hard work looking for an idea.... until we got it.

Suddenly, some assembled pieces of cardboard started  gaining strength, they were simple, manipulable , affordable, versatile.... WE CAN! That´s how  the CARTOON JOCS arose.

The name combines two concepts: "Cartoon", Anglo-Saxon term for the cartoon, and "Jocs" which in Catalan means games. Cartoon Jocs can then be defined simply as animated games. But it is something else. Our main challenge is to translate the design of hand-made prototypes to mass production without losing any of its original freshness.

Author objects, recyclable , ecological , affordable , collectibles, friendly, ready to assemble without scissors or glue and capable of satisfying everyone.